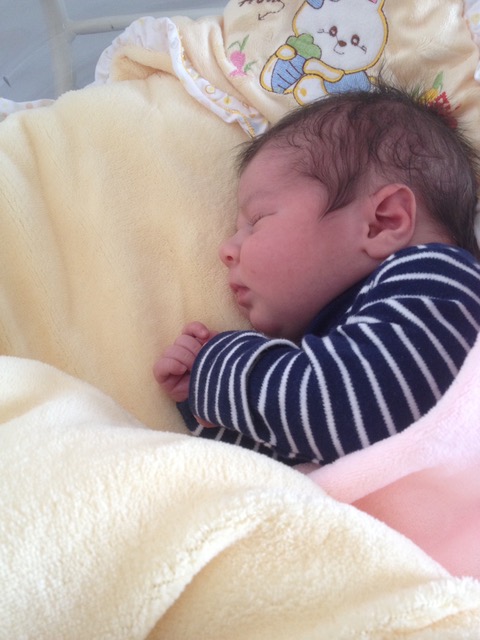 February 29, 2013 was my last prenatal appointment with Dr. Chen of the Baijia Oriental Hospital. She had stopped scheduling me for regular appointments before my due date even hit. Every time I entered her office, she acted as though I was a ticking time bomb ready to drop a baby at any minute! Perhaps her reaction was understandable… After all, I was a week overdue!

February 29 was no exception. She checked on Baby Kiwi using a Doppler and an ultrasound. Of course, I had my regular half hour of oxygen inhalation as well! My mom, who had just arrived from the States to help me with the baby, got the full tour of the hospital and saw how appointments usually went. I was happy she got to see how that works in a foreign country. After everything was taken care of, we sat down with Dr. Chen for the final time. She told us our baby’s head was measuring 9cm larger than she normally felt comfortable with and strongly advised us to check into the hospital that day. The attitude in the room changed instantly. My husband, Jeremy, and I exchanged glances, and I knew both of us were tired of waiting for this baby to come. My experience with pitocin last time (I waited 15 days past my due date—then had the highest level of pitocin to birth our firstborn daughter, suffering tetanic contractions the whole time) made me a little hesitant to go in any earlier than I had to, but my impatience was clearly winning that mental battle. I didn’t know it then, but Jeremy had prayed that God would show us clearly if this baby needed medical intervention to come into the world.

That’s precisely what happened: We contacted Angel, our number one translator of choice, and learned that she only had February 29 and part of March 1 open on her calendar. Unless I went into labor immediately, we would have to use a different translator or wait another 3 days for Angel to return to Wenzhou. Since we secretly wanted a Leap Year Day baby anyway, I felt the decision was already made.

We asked Dr. Chen if we could think about the decision over lunch and we headed straight home. We ate a quick meal of chicken, veggies and rice and immediately started packing the rest of our things for the hospital. Devyn (our fellow American and co-worker) agreed to take care of Zoe and our pet fish. Mom and I dropped them off and we met Jeremy at the front to take a taxi to the hospital. Stress was eating away at both of us, and we wound up arguing and making up all before the taxi arrived. At long last, a taxi showed up and took the three of us to the hospital around 3pm. As with my daughter’s birth, it wasn’t the hair-raising, fast-paced, middle-of-the-night adventure that takes place in all the stories you hear, but there was plenty of adrenaline involved just the same! Once we checked into our room, we took Dr. Chen’s advise to walk stairs. I walked and walked the 7 stories of the hospital, sometimes by myself and sometimes with Jeremy or Mom.

Why was I walking stairs instead of having a kid? Unfortunately, something got lost in translation and the hospital was planning for me to check in on February 29 and be induced the morning of March 1. I felt very disappointed about not having my Leap Year Day baby, but also relieved to get another night of rest. Haha! What was I thinking? Rest in a hospital—the night before having a baby?? Mom and Jeremy took turns snoring alternately and the thought of pushing out another baby was enough to steal most of the sleep I’d been hoping to get. The nurse who walked into our room at 7am was surprised to find me awake, dressed and eager to get induced.

I didn’t have to wait terribly long. I think they put me on Pit around 10am. Much to my chagrin, I learned that the hospitals here in China are even stricter on laboring mamas than the ones in the States. I was forbidden to move at all while the IV dripped Pit into my vein. They wanted me to lay flat on my back, which aggravated my lower back terribly and made me cry. Angel helped so much during this time. She played worship music for me on her phone and explained to the old nurse on duty that we foreigners like to walk around to encourage labor to start. After that, the nurse let me off for occasional 20-minute breaks. I felt much more comfortable for the next few hours; snacking on granola, talking to Mom, Jeremy & Angel and pacing up and down the short hall outside my room.

The comfortable part ended at 5pm. My spirits hit an all-time low as soon as I met the head delivery nurse who had just come on duty. This Chinese woman with immaculate makeup and short, perfectly groomed haircut marched into the room and informed us that she would be the one to deliver my child. She said I was to obey her every command because I was in her hands. I immediately took a strong disliking to her, but once again Angel came to the rescue. She calmly reminded me that I was in God’s hands, not the doctor’s. Shortly afterward, the pit seemed to take effect all at once. I was hit with wave after wave of incredibly painful contractions. Angel had the nurses get me a labor ball and the delivery nurse showed me how to lean on it to help ease the pain in my lower back. Maybe she wasn’t so bad after all!

Meanwhile, everyone around me was in a flurry of activity to move everything to the delivery room. We couldn’t figure out why they were insisting I go to the delivery room when they had just said I was measuring only a 3. I asked Jeremy at this point if I should get an epidural, but he advised against it. For one thing, he reminded me of my sensitivity to most drugs. Secondly, he suspected it was too late.

Turns out the hospital staff knew what they were doing, and Jeremy was right. I was ushered into the spacious delivery room in between contractions while Jeremy & Angel donned scrubs, masks and hairnets. Poor Mom who had flown all the way from America to see the birth of “Baby Kiwi” (since we aren’t allowed to find out the gender of our baby before they are born in China, we always give ours a womb nickname) was forced to sit out in the waiting room. We were told she couldn’t join us because one more person would make the room “unsterile.” As it was, they made us pay 500yuan extra to let Jeremy in to this so-called sterile environment with water stains and chipped ceiling paint.

The delivery nurse had me lay flat on my back with my feet up in stirrups for the baby’s birth. Angel asked if a C-position would be okay, and she agreed that would be fine. Angel also put her worship music back on, which almost drowned out the horrid nursery chime that went off periodically and seemed to taunt me rather than remind me a baby was about to be born. I entered that strange time warp where the only rhythm that existed was contraction, break, contraction, break. Occasionaly, the delivery nurse would squint her eyes at me over her face mask and encourage me: “加油!”

I was in excruciating pain. I knew if my water broke, I might have some relief from the pressure I felt. Jeremy and I were pleading with God aloud to let it break, and eventually the delivery nurse went in and broke it for me. Sure enough, I didn’t automatically feel wonderful, but some of the pressure did ease up as my waters gushed out.

All the while, Jeremy held my hand and spoke encouragement to me as I contracted. He reminded me that God had not given me a spirit of fear along with many other well-placed fragments of Scripture. I was amazed at how encouraging he was with this baby’s birth!

I had other helpers as well. One of the Chinese nurses to my right reminded me to breathe correctly. When she indicated that I should change my breathing pattern, that was my first real sign of hope that the end was drawing near! I felt the urge to bear down and push, and the delivery nurse encouraged me to push with all my might. She placed her hand near my perineum to prevent tearing, so I was able to stop worrying about that. The nurses moved a lined trash can in between my legs and—once again—surprised me with how quickly the baby seemed to be coming.

Jeremy glanced down occasionally, and I heard him call out, “I see him! I can see the baby’s head! Oh, wow, he has so much hair.” With one final push, our baby slipped over the edge of my vaginal opening and relief filled my whole being as the rest of him slid out. I heard the baby wailing as they cleaned him up between my legs, though I couldn’t see him at all. Once again, Jeremy’s voice sounded loud and clear above the Chinese women’s chatter: “Rachel, it’s a boy!”

Little Joash Elliott Van Strien made his appearance at 6:49pm, a mere 45 minutes after I had been admitted to the labor room! I still praise God that his delivery was so brief and that the only tear I had was very small. Ash weighed in at 9 pounds, 8 ounces and measured 52cm in length. Angel smuggled in his Granny to hold him and get a quick picture before she was hastened out of the room again. Jeremy and I had some trouble settling on a name, but Jeremy made the final decision. Joash means “Fire of Yahweh” and Elliott means “Yahweh is God.”

Over the next few days, I was greatly amused by the Chinese nurses (who always appeared in small droves). They pulled out their iPhones and took pictures any time they could get away with it! Devyn had advised me to lock the door while breastfeeding, which helped me feel somewhat less violated. As long as I was covered up, I was proud to have them fawn all over our first baby boy! The best part was when a team of nurses squealed with delight over Ash’s baby pants. They had never seen American-style onesies and pants for a newborn! Some told me there was no way a baby could stay warm enough in those clothes, but the rest were smitten by the tiny “adult-looking” clothes and didn’t seem to mind.

The worst part of my postpartum treatment came in the form of a terrible heat lamp. My nurse would help me strip down below the waist, open my legs wide (ouch!) and radiate heat and light directly at my recovering lady-parts for 30 minutes each day. After two days of pain and humiliation, I assured my medical staff that I was sufficiently recovered to never need a heat lamp ever again.

While we were in the hospital for those three days, our entire team came to visit us in the hospital, bringing so much fruit we could have opened our own fruit stand! It was so wonderful to see all our Chinese and American friends, and I felt greatly cheered. How could we have such amazing support in a foreign hospital when we had only lived in China for 9 months? Joash’s birth story had turned out more wonderfully than I could have even imagined.