Choosing a Hospital in Shanghai to have a Baby 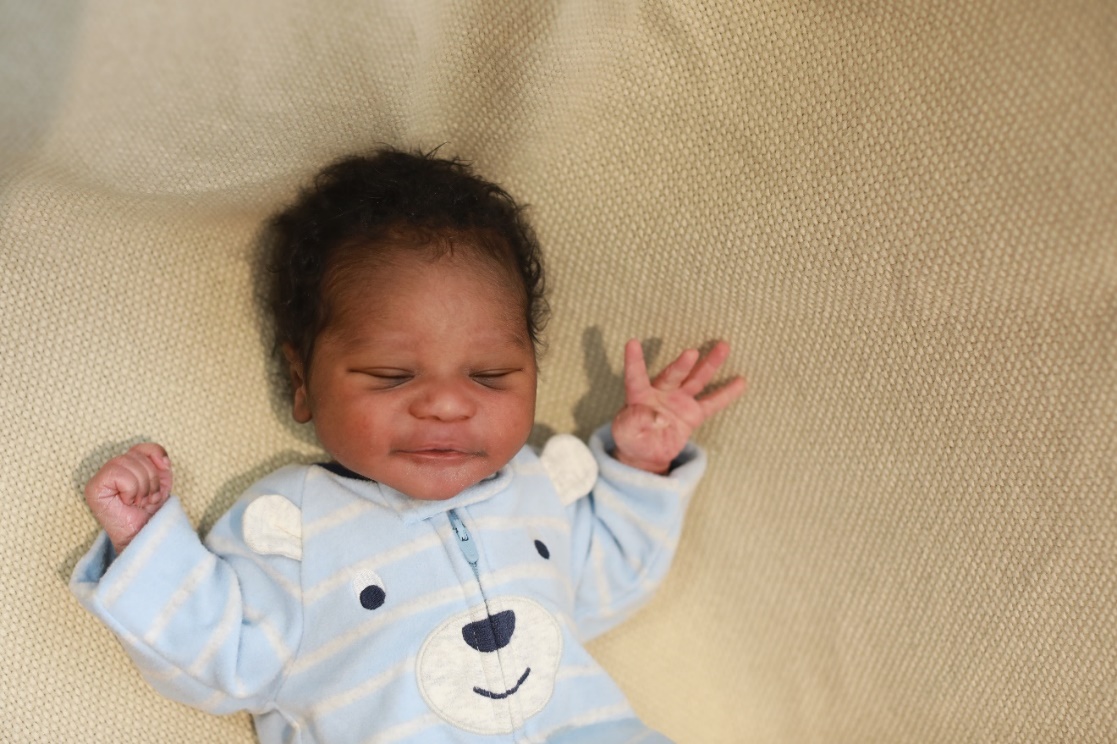 An interview with an expat mom

Having a baby is one of the biggest and most rewarding decisions anyone can make. But delivering in a foreign country can also be daunting. Many expat moms-to-be wonder, “Should I go back to my home country or should I deliver here?” We caught up with Brittany, an expat mom in Shanghai, to hear about her experience choosing a hospital as a first-time mom in China. She delivered her baby boy, Travis, at Jiahui International Hospital last month. 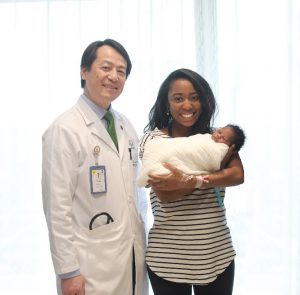 This was your first pregnancy. Did you have any concerns about delivering in China?

My prenatal care was done at a public hospital and then I switched to an international hospital for the delivery. I made the switch because communication is so important. At the public hospital it became quite stressful because my doctor didn’t speak English and the nurses needed to translate everything. There were also some cultural differences in terms of care. In the US, it’s normal for patients to ask questions and for the doctor to be able to spend a lot of time with you, but obviously in a public  hospital in China they have to see so many patients that you might only get about five minutes with the doctor, and that means it can be difficult to get the explanations and reassurances that you would like.

What you really want, especially as an expat having your first baby here, is a doctor that spends time with you, explains each step as you go along, and answers your questions.

Communication is also an important factor in safety, isn’t it?

Definitely. If there’s a lack of communication, you might wonder to yourself, “What if I need an emergency C-section? How is this process actually going to work?” So it’s very helpful if you are confident in the doctor’s experience and what the contingency plan will be if something goes wrong. Just knowing what to do in that situation, who to contact, who to call on, really puts you at ease. It’s also nice to know that you can have some input on what measures are taken if there’s an emergency and actions aren’t going to be taken without you being told what’s going on.

What resources did you use to compare different hospitals?

I checked out www.havingababyinchina.com. That had some useful information on hospital listings. If you’re already in China, there are a lot of WeChat groups for expat moms, which tend to be the most up-to-date sources of information. People join those groups as they become pregnant, but they also often stay in the groups, so there’s a good mix of moms-to-be and moms who’ve already had their baby and want to share their experience and advice. It’s also a continuous source of support, even after you’ve had the baby, because other moms give you advice on vaccinations, pediatricians and things like that.

Is that how you found out about Jiahui International Hospital?

Yes, I saw a post in one of the groups. Somebody said they’d heard about the hospital and they were going to take a tour. They posted pictures in the group. It was about two weeks until my due date and I had been thinking about switching hospitals but didn’t know if it was too late to do so. I took a tour of the hospital myself after I’d heard good things from that mom in the WeChat group.

What should people look out for during a hospital tour?

Obviously you want to check that the facilities are nice but, as new mom, it’s more about the actual medical care that you’re going to receive and how much attention you’ll get. When you’re on a tour, make sure that you can speak to a doctor or a midwife; that makes a really big difference. I visited a lot of hospitals where the tour was just walking around the facilities with an administrator. That’s OK, but you don’t get any details about the medical process or the level of care. When I visited Jiahui, I got to speak to Dr. Lin, the chief obstetrician, and that was probably the biggest factor in my decision to go with them. He was very good at answering questions and reassuring me.

Another thing you should check is if there’s a NICU (neonatal intensive care unit) because a lot of international hospitals don’t have one. What that means is if there’s an emergency, or your baby is born with complications, they’ll need to be transferred to another hospital with a NICU to get more care. This is particularly relevant to moms who have high-risk pregnancies; you’ll want to know what’s going to happen in the event of an emergency and if there are doctors who can handle that.

You might also want to check how many people can be in the room when you’re going into labor because that can be quite restrictive in China. In a lot of the public hospitals, you have to labor by yourself, which can be stressful.

It’s also useful to know if the hospital offers different delivery methods to suit your needs, and also if there is flexibility with pain relief. In some Chinese hospitals there’s a set time for getting an epidural; if you choose not to get it at that time, but you decide that you want it later, you may not be able to get it. For me, it was nice not to be pressured into getting an epidural when I didn’t want one, while also having the flexibility to get it later and be able to control my own dosage.

How was your delivery experience?

It was good. I actually made the decision to deliver at Jiahui International Hospital on a Saturday, went into labor on Sunday, and then the baby was born on the Monday. So, it all happened very fast! Since the hospital is relatively new, it probably wasn’t a normal experience; I had so much more attention than I think a normal mom would get. Labor was long; Dr. Lin actually had to break my water, but all the midwives were really nice and helped me manage the pain. My boyfriend and his mom were there and they had plenty of space to be with me and relax. It was a natural birth; Travis came out completely healthy and there were no scares. We even had a little party for the baby after the delivery! 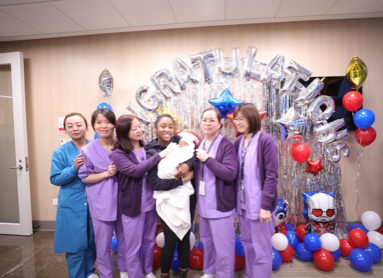 Any final advice for expectant moms?

I’d say anticipate all of your questions and find a place where you can easily find information about different hospitals. If you’re already set up in China, WeChat is a great resource for word-of-mouth recommendations and advice. If you’re new to China and you’re not plugged into WeChat or you don’t have a network, Google is still very useful.

Once you have a list of hospitals, set up a visit for all of them, as it’s all about which one makes the best impression on you. I’ve met a lot of other moms who’ve switched hospitals because they didn’t like the doctor, or because someone was a little harsh with them, or they just didn’t feel like they were getting enough attention. Going into childbirth is a really emotional time as well as a physical one, so I think the tour makes a really big difference. 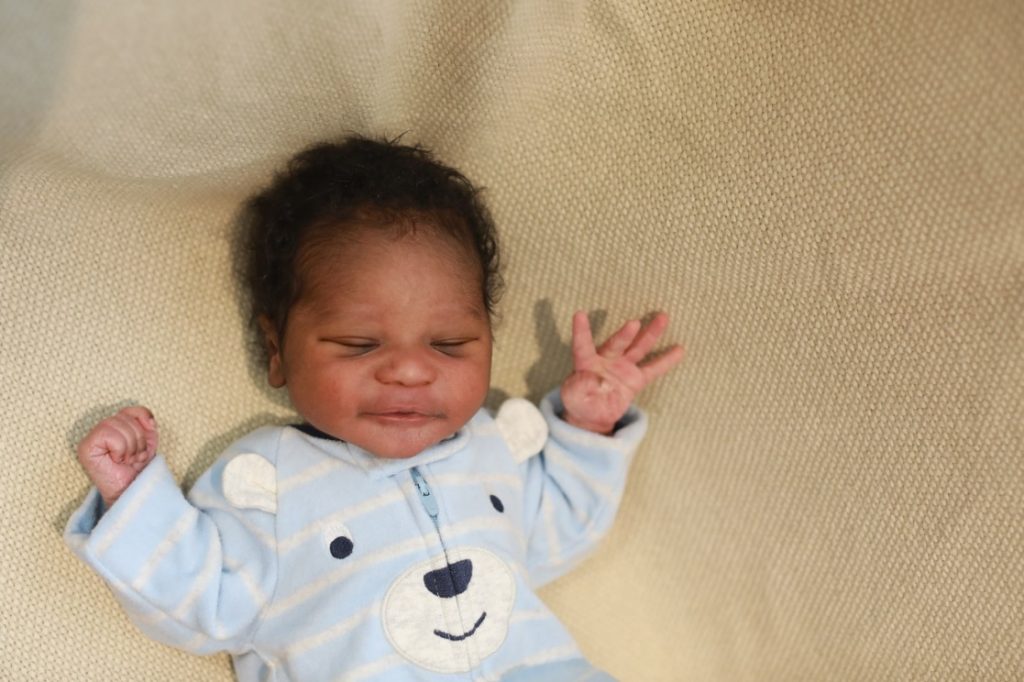 Travis was born completely healthy and without complications

Founders of havingababyinchina.com, Jeremy and Jacquelyn have four children. The first three were born in three different hospitals in China and the last was born at home in the US. Jeremy and Jacquelyn created havingababyinchina.com in 2009 after they found little information for foreigners having babies in China. They love connecting with other foreigners having babies. Learn more about them on the about page.