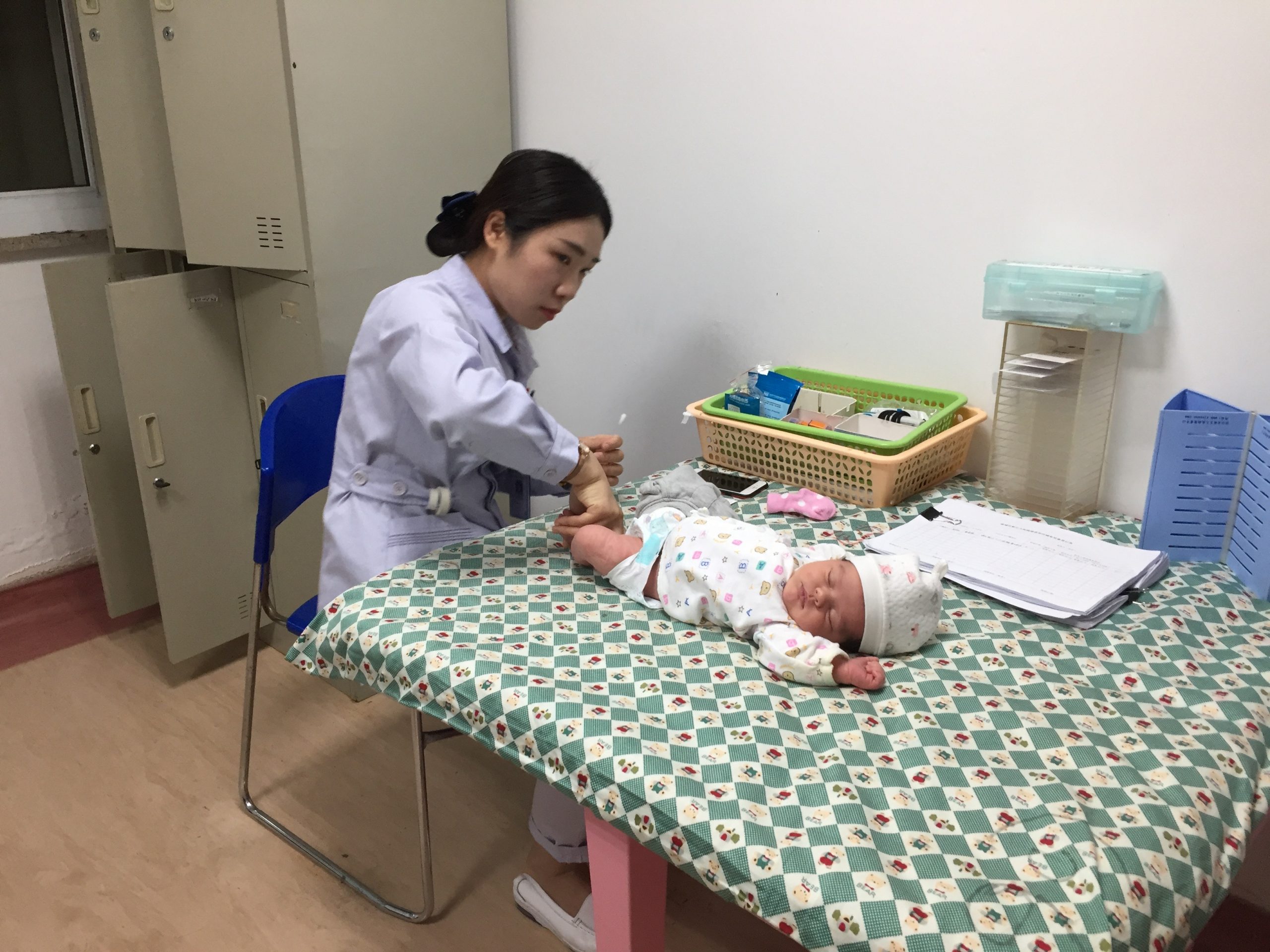 After such a dramatic entrance into the world, the hospital room seemed so calm and serene for the next two hours. I was content to hold our new baby Rylee, answering the nurses’ questions about who we were and how my pregnancy had been. They literally knew nothing about me and were upset they hadn’t reviewed my prenatal records before I delivered.

At this point, what could I do? I shrugged and smiled, motioning to the baby. “Nothing can be done,” I said using a common phrase in Mandarin that often comes in handy when it’s too late to change a situation. “My babies come fast,” I said truthfully. With all three children, my active labor time had been five hours or less!

The baby and I were perfectly healthy—that was good news. The bad news was there were absolutely no regular hospital rooms available for our family. The nurses offered two options: pay an extraordinary rate for a VIP private room on the top floor or sleep in the hallway.

My husband had disappeared shortly after Rylee’s birth, and I assumed he was making arrangements for us to stay. In actuality, the hospital staff had kicked him out and he was sitting with our bags (which we had abandoned in the hallway) wondering why he couldn’t be with his wife and newborn daughter!

After many requests on both our parts to see each other, the staff allowed Jeremy back into the room. We both knew a VIP room would cost a small fortune, so we opted to spend the night in the hallway and leave the hospital as quickly as allowed.

The time spent in the hallway was highly memorable, and we don’t recommend it to anyone! When the doctor came to visit us for the first time after the baby was born, he told us Jeremy would need to be my full-time care taker. He also informed us that the hospital did not have enough food to feed all of their current patients. He explained that since the one-child policy had been lifted so recently, families were flooding the hospitals to have their allowed second child. Very apologetic and polite, he told us this was the situation in most major cities in China.

Our eyes verified what the doctor said! The hallways were packed with beds, a number on the wall indicating which patient was currently staying in that temporary space. Hallway patients and their family members shared bathrooms with patients lucky enough to have a room. The toilets and bathrooms were filthy since cleaning staff couldn’t keep up with the amount of patients.

Because not many foreigners frequented this hospital (at least… not the hallways), we attracted many curious people. Jeremy’s job whenever he was at our side was to set up temporary screens to shield us when nursing, discourage bystanders from constantly photographing the baby and fielding the most common questions we get in China.*

Unfortunately, there were many times when Jeremy was not around. As he sought permission for me to get my RhoGAM shot administered by hospital staff, women would close in on our hallway bed. The older generation of Chinese women has no problem openly sharing advice with those younger than they. “What a beautiful baby!” was exclaimed right along with, “That baby is not dressed warmly enough.” I was frequently reprimanded for not following the strict rules of the Chinese postpartum 40-day period.

If I spoke no Chinese, the women usually moved on. One, however, jabbed me several times in my very sore breast as I fed Rylee. Not wishing to offend (but feeling very violated), I swatted her hand away and shook my head no. The woman thankfully took the hint and walked away!

As I laid on my hospital bed, I became an unwitting observer to many families in tender moments of transition as they too welcomed their babies. The couple across from me were experiencing their first full day with their first child. I watched as they struggled to change their baby boy’s diaper by themselves. Neither had much experience with children, but their love for the new baby was evident in the way they devoted themselves to his care. The wife had just had a C-section, so her young husband was put in charge of changing her catheter. I winced in horror as her urine splashed onto my skin from the short distance across the hall. Couldn’t be helped though! The man was not a trained nurse and was doing his best to help his little family.

Just down the hall, I saw another family grab a blood-saturated pad with their bare hands to hoist into the common garbage. I felt so many emotions all at once! Disgust at the lack of medical cleanliness all around me. Compassion for the Chinese women, all who were recovering from longer labors and in most cases C-sections, crammed into this hallway with their loved ones. Sympathy for the hospital staff, overrun with people in their care, yet underpaid and so often unappreciated. Above all—I could not wait until I could go home.

No one got much sleep that night! Lights went out in our hallway at 11pm. Jeremy ordered a temporary cot and tried sleeping beside us. But if our baby wasn’t crying, someone else’s was! Sounds of snoring and people getting up to use the bathroom were also common sounds.

The next morning, the hospital was just as eager to send me home as I was to leave. However, the baby had to complete her newborn tests and they had to issue us a birth certificate before we could be discharged. We caught a mistake in our newborn baby’s name, a huge gap right in the middle of her middle name.

“Does it matter?” asked the hospital staff.

Our Chinese friend Eric, who came to pick us up from the hospital, explained that we foreigners were really particular about our names. The hospital then reprinted the certificate.  The ink was still fresh at 1pm that afternoon as my husband and I signed our names to the important document.

Eric and Jeremy carried our bags and I carried our precious little baby to the parking lot. As we climbed into Eric’s vehicle, I breathed a sigh of relief. And as it turned out—home recovery turned out to be wonderful!

Rachel is an American expat currently living in Wenzhou, China, with her husband and three children. She and her husband moved to China 2012 and have lived in Jiangxi Province and Zhejiang Province. Rachel enjoys teaching, singing, playing piano, drinking tea, reading and camping with her family. She is passionate about education. You can check out her website at www.outoftheboxpreschool.com!